You are here: Home > Blog > The road less travelled
◄Back to News 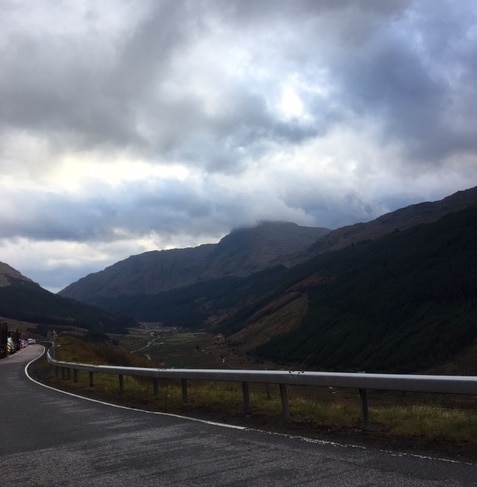 It has been an amazing month of employer success here at HRFCA, and we have been travelling hither and thither arranging signings of Armed Forces Covenants, and supporting local businesses at a range of presentations of Bronze, Silver and Gold ERS awards. From the MacRobert Trust in Aberdeenshire, Ordered Company and SFB consulting in Elgin, to Blackadders and Hillcrest Housing here in Dundee, Forth Valley College in Stirling and through to Midton in Argyll and Bute, the miles have been racked up across the patch as the REEDS hit the road. (Mind you, not as many miles as travelled by our new colleague Sergeant Major George Seathwood – but more of him later!)

Being a wandering REED in the Highlands brings its challenges and last week was no exception. Having completed the three-hour journey to Elgin to witness the signing of two AFCs, the long road home was closed by an RTA with all traffic turned around and diverted. The long road home was about to become a lot longer…

Faithfully following the SAT NAV (big mistake, it is possessed!) I wound my way down the country along an ever narrowing and more tortuous route through the Cairngorms. Boggy, windswept moorland to either side of the single track road with dark forbidding mountains on either side and not a soul in sight for miles . . . and miles . . . and miles. As the road twisted on endlessly, the light began to fade and the fuel gauge continued to drop, I began to feel the first chill stirrings of fear. The headlights lit up the glowing eyes of REED-eating beasts at the side of the road – ok, they were sheep but it was scary! – and I despaired of getting out alive. Perhaps in months to come someone would find my mouldered corpse, picked clean by eagles and buzzards with just a signed AFC clutched in my bony hands to show what I had achieved. Needless to say, I eventually made it out alive, several hundred miles wearier and in need of a stiff gin. A day’s respite in the office and then it was off again, this time heading west to Argyll and Bute and surely a more pleasant drive ahead? All went well until the glowering black clouds opened and torrential rain had the wipers in hyper-drive. Held up by traffic lights at the Rest and Be Thankful due to a massive landslide it was hard not to focus on the perilously unstable rock formation to the right, or the sheer drop to the valley floor on the left. The next six miles of landslide imminent warning signs were passed with a muttered incantation of “not now, not now” until I reached the lochside roads and could relax. Or could I? With the grey choppy waters of Loch Fyne just inches away from the car, the scene from Lord of the Rings kept playing in my admittedly over-active imagination; the one where the monstrous beastie sends its writhing tentacles to pluck living creatures from the small strip of dry land running alongside. I was mightily relieved to arrive at my next AFC signing – never has a visit to an acrylics moulding factory been more welcome. I was also relieved that the co-signatory was Submariner Commander John Livesey. Handy chap to know when it comes to dealing with underwater hazards. George enjoying the view over Manhattan, during some R&R after the marathon.

The journey home next day was relatively uneventful and my travelling companion – Sergeant Major George Seathwood was a comforting presence. George joined the EE team some months ago and has been very busy travelling in his role of Builder of Employer Activities Regionally or B.E.A.R. He has already helped out on the flight deck of a LoganAir flight to Stornoway and given several radio interviews, explaining the work of HRFCA. George with some famous faces in Times Square.

Last month he travelled to Washington and New York with the team from 7 SCOTS taking part in the Marine Marathon 2018, and represented us at a range of events, even managing to sneak into the Pentagon to brief the Press Corps. For a bear of few words he does get our message across and his travel companions WO2 Dave Swash and Captain Brian Baxter kept us up to date with photographs during his trip. You can see where he heads to next on Twitter where he has his own hashtag #followthebear. George in the Press briefing room at the Pentagon.

So, another week over and more employer pins in the map. In truth it’s wonderful to see the spread of employers engaging with us across the Highland region and life is never dull. This week it’s Aberdeen and then on to the Isle of Lewis where yet more Employer Engagement adventures await us.

“I shall be telling this with a sigh,

Two roads diverged in a wood, and I –

I took the one less travelled by,

And that has made all the difference.”