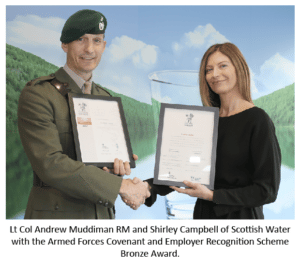 Scottish Water is committed to supporting
Veterans, Reservists and their families​​​

Scottish Water supports Veterans and Reservists seeking career pathways in the water industry in Scotland. They also offer flexible support before, during and after a deployment to those whose spouses serve in the military.

“As part of our commitment to diversity and inclusion, we have a network of support groups internally in Scottish Water.

“Scottish Water takes seriously its commitment to being an employer of choice for those leaving armed service and providing tailored support to those who find themselves seeking a new career pathway.

“That support extends to families of military personnel and employees who are Reservists. We recognise that the training and experience gained in these roles can significantly enhance learning and development within the workplace.

“We have benefited from the transferable skills of those who have been in service. The type of vocational and leadership skills taught in the Armed Forces is sought after by Scottish Water.”

Before Samantha Morgan joined Scottish Water, she was one of the first female submariners in the long history of the Submarine Service.

AB (Able Rate) Morgan spent three years serving with the Royal Navy on a number of nuclear submarines before joining the People Team at Scottish Water as a coordinator.

Samantha said: “Having a female submariner on board has advantages. We add diversity to the team – women tackle problems differently to men. We talk our way through a problem, discussing the situation in detail, and how it could be solved. Men can approach problem solving with much less communication. I’ve been able to transfer those skills into my civilian role with Scottish Water.”

Samantha was on board HMS Ambush when it suffered damage to its conning tower after hitting a merchant ship as it surfaced near Gibraltar in 2016. She says: “After hearing a boom the submarine started to rapidly sink backwards which was terrifying because my immediate thoughts was that there’d been an explosion and we were at risk of fire.

“The crew all went to their emergency station. We released air from our compartments which threw the boat back up to the surface. That was frightening too because I thought we were going to hit the same ship again.”

Luckily no-one on board was injured but the cost of damage to the £1 billion vessel was £2.1m. A senior commander later admitted hazarding a ship after the nuclear submarine, of which he was in charge, crashed into the other vessel.

Samantha added: ““The pressure I experienced during the collision in Gibraltar and during other incidents whilst in the Royal Navy has enabled me to become more resilient. This is obviously an excellent skill to have in the workplace.” 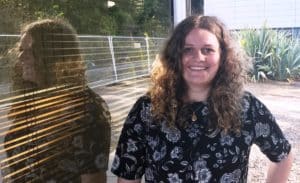 Samantha is thoroughly enjoying her job with Scottish Water.

She left the Royal Navy in 2017 to spend more time with family and create new adventures. She applied for a job with Scottish Water’s People Team because it was a challenging role with the chance to learn new skills. She took up the role as a co-ordinator in February 2018 and loves it.

She said: “In the Royal Navy you learn how to prioritise your work and manage your time effectively. I have been able to transfer these skills to my role with Scottish Water. Completing a three-month tour aboard a nuclear submarine shifts you out of your comfort zone and you learn how to work successfully in tricky situations. Living in such close quarters with others for extended periods has taught me to be more tolerant of others.”

Tardiness is not tolerated in the Royal Navy, so Sam became anxious on her first day at Scottish Water when she was stuck on the Edinburgh Bypass travelling from her home in Dunbar.

She said: “I thought my line manager would punish me for arriving at work late. I expected to be asked to come back to work on the weekend. It was so refreshing when I realised how supportive Scottish Water were with their Veterans and Reservists – transitioning into the world of work is a huge culture shift.

“At the end of my first day I think I would have still been at my desk the following morning if my Team Leader hadn’t asked me why I wasn’t going home. I was never allowed to finish my day in the Royal Navy without being given permission to leave.”

“Veterans and Reservists are a vital group of skilled individuals within our community. Scottish Water welcomes applications from this group and we offer support in transitioning into civilian employment.”