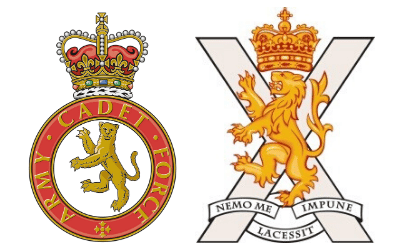 Army Cadets from Aviemore are not letting the global pandemic prevent their progression, receiving their stripes at home from their families.

1st Battalion The Highlanders Army Cadet Force is a youth organisation that provides challenging adventure as well as sporting and community activities, aiming to inspire young people to achieve success while having fun at the same time. Detachments are still presenting cadets with certificates and awards during lockdown, giving them the recognition they deserve. Most recently, two cadets from 1st Battalion The Highlanders’ Aviemore Detachment were promoted to Lance Corporal by their families. With the blessing from their Company Commander, Cadets Callum Moneagle (15) and Harvey Richards (14) were promoted.

Aviemore Detachment Commander, Staff Sergeant Instructor Tony Brown, did not wish to delay the promotions of the two cadets. Therefore, with the Inverness Company Commander’s blessing, SSI Brown got the cadets’ families to present them with their new rankslides. In the safety of their gardens, Cadets Callum and Harvey received their stripes and promotions by their families. Lance Corporal Moneagle proudly received his first stripe by his mother Katie at their home in Kingussie, whilst Lance Corporal Richards was presented with his stripe by his grandmother Vivian at their home in Newtonmore.

SSI Brown told the local newspaper, Strathspey & Badenoch Herald: “Callum Moneagle and Harvey Richards have both been cadets for around 18 months now and they are top quality. They are the first two cadets I have personally promoted, so it was special for me as well. I asked the Company Commander for permission as I thought it was important that we awarded our cadets on passing all their one-star level training. I felt we should show them and others that their achievements haven’t been forgotten just because of the coronavirus. It also sends out a positive message to other cadets, that they can still achieve no matter what the situation is.”

For more information on the Army Cadet Force, click here.