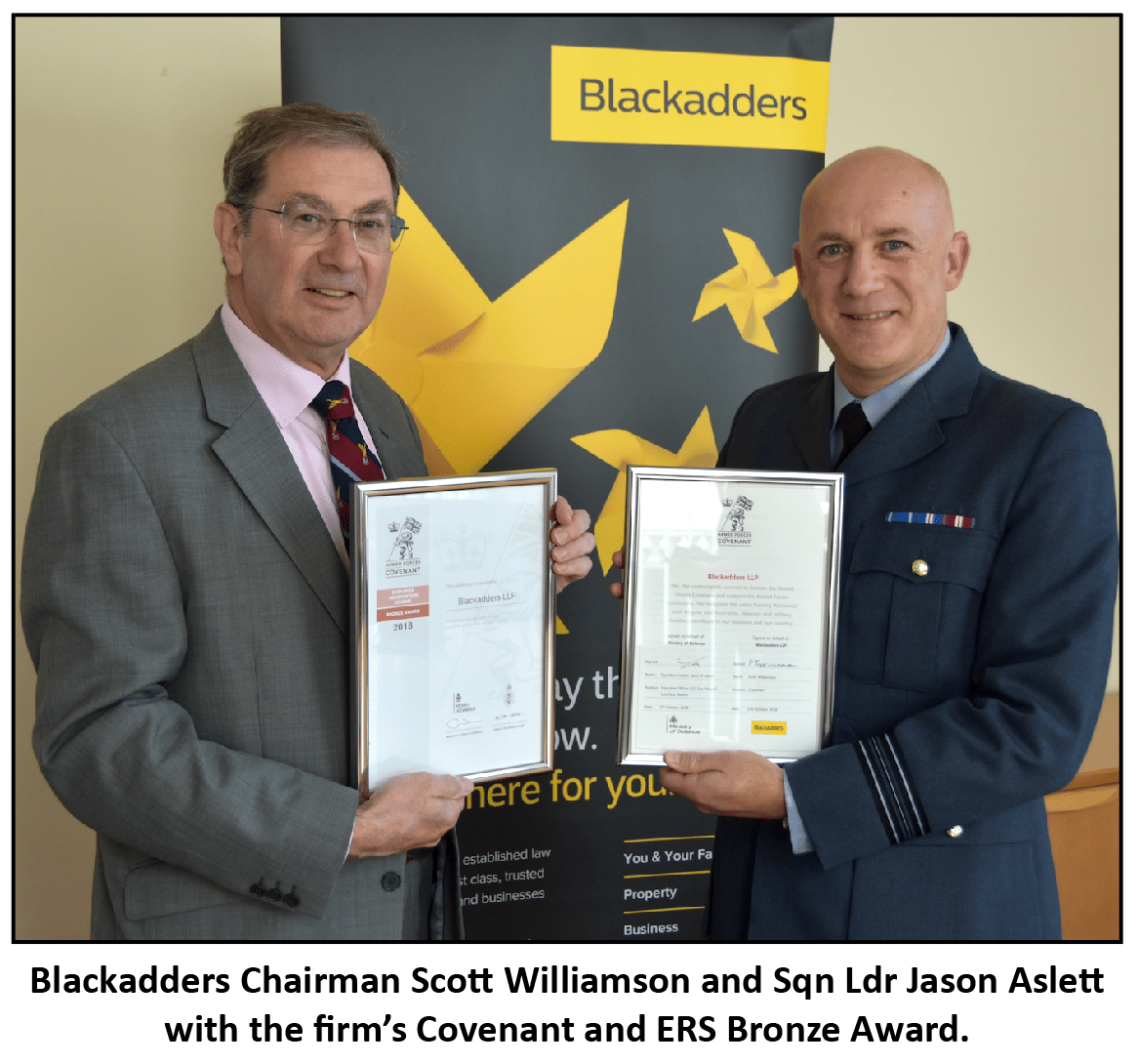 Leading Scottish legal firm Blackadders has become the latest organisation to sign the UK Armed Forces Covenant, a commitment to support servicemen and women wherever and however it can, ensuring no member of the Armed Forces should suffer a disadvantage because of their service.

Blackadders joins more than 2,500 UK organisations to have now signed the Covenant.

Chairman Scott Williamson signed the document at the firm’s Dundee offices. It was co-signed on behalf of the Ministry of Defence (MoD) by Squadron Leader Jason Aslett, Executive Officer of 612 Squadron of the Royal Auxiliary Air Force (RAuxAF), based at Leuchars Station.

Mr Williamson said: “Blackadders is proud to make a commitment to the UK Armed Forces through the Armed Forces Covenant. A number of people in the firm have served – some as regulars and others as reservists – and have first-hand knowledge of what that service involves. We have all seen the sacrifices made by our Armed Forces personnel, veterans, reservists and their families and we feel it is important that this is acknowledged. Signing the Covenant formalises our pledge to back service personnel, whether they are employees or our clients.”

Blackadders’ commitment to honouring the Covenant includes pledges to:

The ERS awards encourage employers to support defence and inspire others to do the same. The prestigious Bronze, Silver and Gold awards are for employer organisations that pledge, demonstrate or advocate support to defence and the Armed Forces community, and align their values with the Armed Forces Covenant.

The Covenant signing was organised by Highland Reserve Forces’ and Cadets’ Association and attended – along with the signatories – by the organisation’s Regional Employer Engagement Director Michelle McKearnon.

Michelle said: “I am delighted that Blackadders has formally pledged its commitment to the Armed Forces community by signing the Covenant. They are a long-established and respected law firm and their support is hugely appreciated. We are very much looking forward to working with them via our Employer Recognition Scheme and thank them for the opportunities they are providing to our forces and ex-forces personnel.”

Blackadders has a network of offices across Scotland. Along with Dundee these are located in Aberdeen, Edinburgh, Perth, Forfar, Glasgow and Arbroath.

For more information on the Armed Forces Covenant and the Defence Employer Recognition Scheme contact Michelle on 01382 631026 or email hi-reed@rfca.mod.uk.