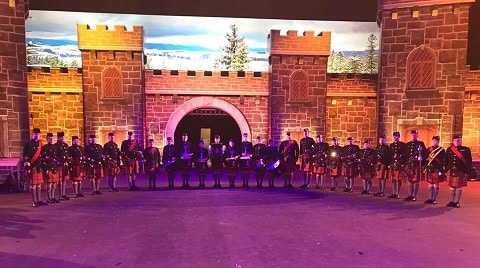 The cadets shared the stage alongside musicians from around the world – as well from the UK – including The Band of the Royal Marines, the Sollentuna choir from Sweden and Deirdre Brennan, a solo singer from the USA who has performed with the Red Hot Chilli Pipers.

This is the third time cadets from the Battalion have performed at the Tattoo. Although there was a busy schedule and lots of rehearsals, the band had plenty of time for sightseeing, including a visit to the Basel Christmas Market for some shopping.

Upon her return to Scotland, Pipe Major Campbell said: “It was a really excellent trip. Everyone worked so hard, which made everything easier. I’d take this band anywhere.” A quick break to the Christmas market.