You are here: Home > Public News > Double nomination for Katlyn
◄Back to News 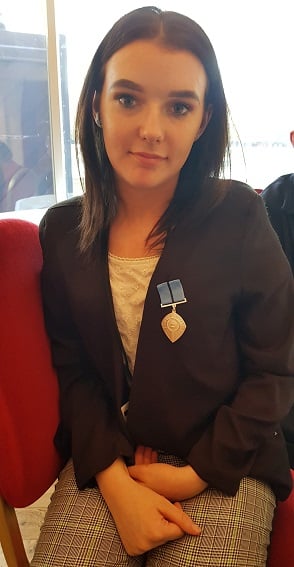 In 2017 Katlyn found a woman in distress at the side of the road in Macduff, her hometown. Katlyn gave first aid to the woman who, it transpired, had been the victim of a serious assault.

Remaining calm, Katlyn dialled 999 and passed as much information to the police as possible and requested an ambulance. She also gave reassurance to the distressed woman. Katlyn learned her first aid skills through the ACF and is proud to help others in need.

Already awarded the British Citizen Youth Award at the Palace of Westminster in London last year, Katlyn was nominated in the Brave Child of the Year category at the Moray and Banffshire Heroes awards.

The red carpet ceremony was held in Elgin at the Mansefield hotel on the 9th of May and was attended by many brave and selfless groups and individuals. Missing out on the award, Katlyn was pleased to be shortlisted.

Katlyn – who wants to be a paramedic – has also been nominated for the Local Hero Courage Award at the Inspiring Aberdeenshire awards. The event is due to take place on the 21st of June at Haddo House and we wish Katlyn the best of luck.