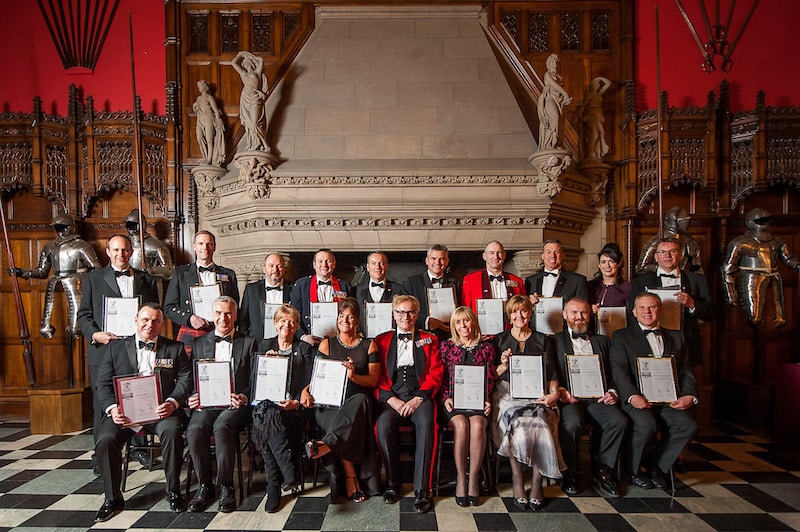 Around 100 guests looked on as 18 organisations were awarded with certificates from the Ministry of Defence (MOD) in recognition of the support they give to the Armed Forces community.

The event was jointly organised by Highland and Lowland Reserve Forces’ and Cadets’ Associations.

The guests and service hosts were welcomed to the Great Hall by Lt Col Hugo Clark, the Commander of Edinburgh Garrison.

Prior to the presentation of the awards, the audience listened to vignettes from the perspective of a Cadet Force Adult Volunteer (CFAV), a Reservist, and an employer.

Stefan Grzybowski of Police Scotland spoke about the benefits of employing Reservists.

First they heard from Flying Officer Ashley Brooks of 1756 (Broxburn) Squadron on the role of the CFAV. Then Scott Menzies, a Reservist with 6 SCOTS and an employee of Loganair, spoke about his dual role as both a Reservist and an employee. Finally, the audience heard from one of this year’s Gold Award winners, Police Scotland. Stefan Grzybowski, the organisation’s Early Careers Programme Lead, spoke about the benefits of employing Reservists.

This year saw a record number of Silver Awards achieved in Scotland. It was also a record year for Gold Awards in Scotland, with eleven of these presented to Scottish organisations on 12 November in London. You can read more about that HERE. The awards were presented by Major General Simon Brooks-Ward, Assistant Chief of the Defence Staff for Reserves and Cadets. Maj Gen Brooks-Ward then spoke to the gathering on the importance of employing Reservists. He also made special mention of HRFCA’s ChamberFORCE initiative, which he praised as “excellent”. Guests enjoyed drinks in the Laich Hall prior to the awards ceremony.

Brigadier Dodson thanked the Band of HM Royal Marines for delivering music on the night to their customary high standard, and to Willie McIntyre and the young pipers from George Heriot’s School in Edinburgh who turned in a fine performance. He also thanked 154 (Scottish) Regiment RLC for helping with the background logistics.

The Defence Employer Recognition Scheme recognises those who demonstrate or advocate support to the Armed Forces community and align their values with the Armed Forces Covenant – a pledge from the nation that those who serve or who have served and their families are treated fairly. Silver Award winners must meet certain criteria, including: employing at least one individual from the Armed Forces community, actively ensuring that their workforce is aware of their positive policies, demonstrating support to mobilisations of Reservists and providing at least five days’ additional leave for training. To find out more about the Armed Forces Covenant, click HERE, and for more on the Employer Recognition Scheme, click HERE.

To see a gallery of images from the night click HERE. Pipers from George Heriot’s School in Edinburgh turned in a fine performance.