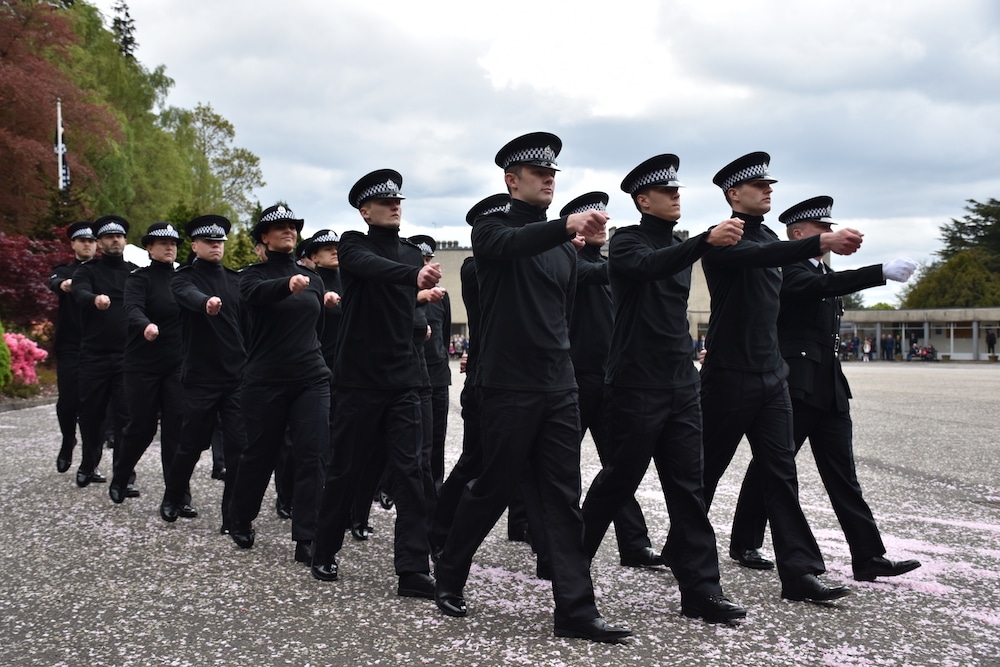 A total of 89 probationers have celebrated completing 11 weeks of training with Scotland’s force.

The recruits officially passed out on 3 May after completing a formal inspection, drill routine and parade at the Scottish Police College at Tulliallan Castle.

Families, members of the community and guests of Police Scotland were invited along to watch the event and congratulate the probationers on their success. The officers came from a range of backgrounds, including university graduates, former members of the Armed Forces and serving Armed Forces Reservists. Every individual was expected to take up residence at Tulliallan Castle for the duration of the course, which involved scenario training, IED identification and disposal, self defence, practice and physical education.

Among the recruits was Royal Air Force Veteran, Corporal Craig Carson. He joined the RAF aged 17, serving as an aircraft engineer for 23 years. Craig completed four operational tours during his service. His last tour saw him placed in a careers office in Glasgow which was very much customer focused and involved him dealing with the public on a daily basis; this led to him joining Police Scotland.

“Obviously my engineering skills won’t really be useful in my police role, but my experience of dealing with the public will be a massive help as will the core skills anyone who serves in any branch of the military has, discipline, integrity and a can-do attitude. It is the ability to remain calm in high pressure situations that will be a huge help to me in my police career.”

PC Carson, also commented on the amount of support Police Scotland are known to give to the Armed Forces community and how important it is to work for an organisation that recognises their potential; Police Scotland have recently submitted their *Defence Employer Recognition Scheme (ERS) Gold Award.

We wish all the recruits the best of luck in their new roles.

*The Defence Employer Recognition Scheme rewards and recognises UK employers for their support and commitment towards Defence. The scheme encompasses Bronze, Silver and Gold Awards for employer organisations which pledge, demonstrate or advocate support to the Defence community, and align their values and activities with the Armed Forces Covenant. An officer watching over the new recruits.