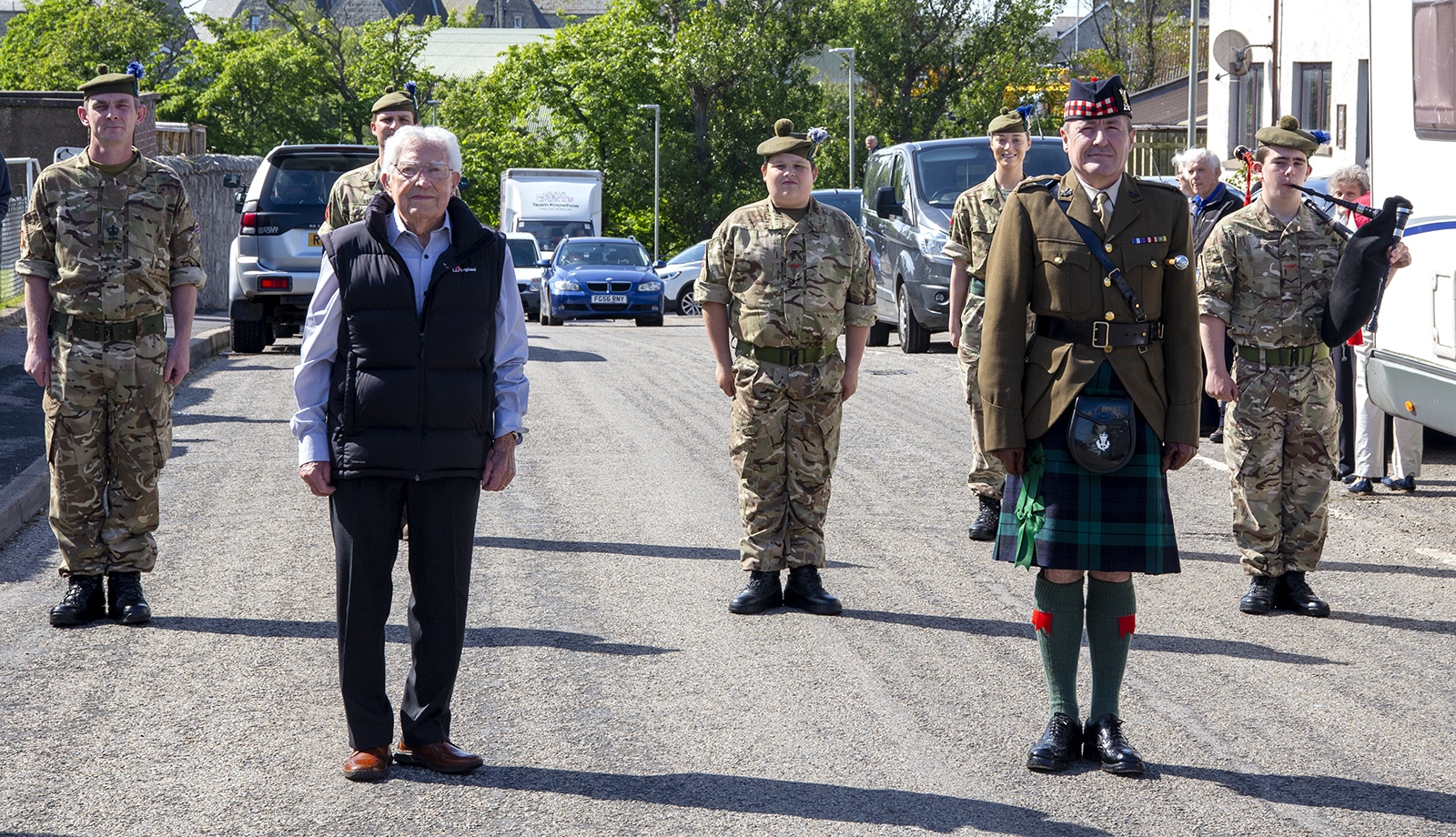 The Cadets saluted the veteran, with Lance Corporal Mackay piping ‘Heroes of St. Valery’. The piping was part of a wider national commemoration of St. Valery.

Following the salute, the cadets and adults spoke with Mr Beaumont who told them more about his experiences in France. He was then asked to perform a special duty for the Battalion on behalf of the Commandant – to promote Staff Sergeant Instructor Taggart to Sergeant Major Instructor.

SMI Taggart, who is the Thurso Detachment Commander, said afterwards: “David is an absolute gentleman, and it was such a privilege to meet him and to receive my promotion. It was an unforgettable moment, a proper lump in the throat moment.”

The whole event was a surprise to Mr Beaumont, with the arrangements for the day made with the help of his wife. He now lives in Brora, Sutherland, with his wife and has three children, six grandchildren and six great-grandchildren.

Mr Beaumont served as a Private with the 4th Battalion Seaforth Highlanders on the Maginot Line before being taken prisoner at Saint-Valéry-en-Caux, along with the rest of the 51st Highland Division. He was held as a prisoner of war at Stalag VIII B in Lamsdorf. However, this was not the end of the war for Private Beaumont. He and two fellow prisoners escaped by taking advantage of lax guards while out on a farm working party. They made it to Russian held territory before being repatriated by U.S. forces from Prague.

As British forces were withdrawing from France, the 51st Highland Division was placed under French command. The bulk of the British Expeditionary Force had already been evacuated from Dunkirk a few days prior, but the Germans launched an attack, outflanking the Allies and trapping the Division and elements of the French who withdrew to the coastal town of Saint-Valéry-en-Caux.

As part of the 80th anniversary events, 30 members of the cadet battalion had planned on visiting France and travelling to the various battlefields and memorials commemorating the Division and their actions. On June 12, exactly 80 years to the day of the surrender, they were also due to parade through the town alongside antecedent regiments of those who fought at St. Valery, dignitaries and veterans. Unfortunately, due to the current global pandemic, the tour has been pushed back to 2021. However, this allowed the cadets to take part in a more personal tribute for the local men who served at St. Valery all those years ago.

To find out more about the 1st Battalion The Highlanders ACF, click here.