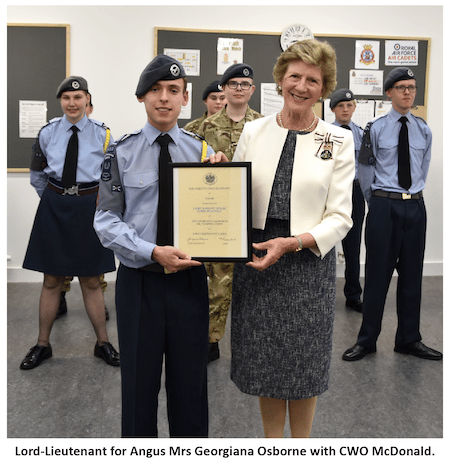 An Arbroath Air Cadet has been appointed as the Lord-Lieutenant’s Cadet for Angus. The Lord-Lieutenant presents CWO McDonald with his certificate.

Robbie McDonald (18), from 2422 (Arbroath) Squadron, received his certificate from the Lord-Lieutenant of Angus, Mrs Georgiana Osborne, at a ceremony in Arbroath on 30 May.

The event was organised by the squadron’s Commanding Officer WO Scott Ross and, along with the main presentation, included demonstrations of first aid, model making and map reading skills.

Prior to the main presentation to Cadet Warrant Officer McDonald, Wg Cdr Harrison presented a variety of badges to the cadets for achievements including marksmanship and leadership. He also promoted Cadet Sergeant Ankit Bhattarai to the rank of Cadet Flight Sergeant. The main presentation followed, with the Lord-Lieutenant congratulating CWO McDonald on his achievement, adding that she was sure he would do a great job over the next 12 months.

CWO McDonald will assist the Lord-Lieutenant in her official duties as Her Majesty the Queen’s appointed representative to Angus. He will also act as an ambassador for the ATC as well as the young people of Angus.

He has been a cadet for five years, working his way through the ranks to CWO and is the most senior cadet in the squadron of 28. He left school two years ago and has recently started a new job at McDonald’s in Monifieth. He is hoping to join the RAF next year. Several of the cadets received badges from Wg Cdr Harrison for a variety of achievements.