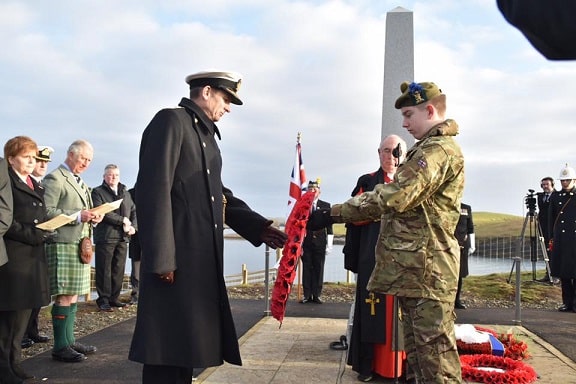 Cadets from the Isle of Lewis brought in the New Year honouring local servicemen who died in the worst maritime disaster to happen on British waters in peacetime.

Cadet Alannah Logue (14) and Cadet Lance Corporal Aaron Ingram (13), from 1st Battalion the Highlanders Stornoway Detachment, along with West Lewis Detachment Commander Lieutenant Alexander MacIver (50) took part in a service remembering the Iolaire, which sank off the coast of Stornoway on 1 January 1919. Prince Charles, The Duke of Rothesay, laying a wreath at the Iolaire Memorial in Holm.

HMY Iolaire was carrying servicemen who had fought in the First World War back over to their homes on the Western Isles. At 0230hrs on New Year’s Day, she hit the infamous rocks “The Beasts of Holm” and sank just metres from the shoreline, with the men on board being able to see the lights of Stornoway.

Due to many of the men being weighed down by their heavy uniforms they were unable to swim ashore. Sadly, 201 men perished of the 283 aboard.

The impact of the disaster was devastating to the Islands, 174 of the men who were killed came from the Islands which represented almost a generation of young men, and such was the grief that few families spoke of what happened.

The service, which took place at the Iolaire Memorial in Holm on New Year’s Day, was attended by local residents, organisations from across the Western Isles and representatives of the Armed Forces community. Also in attendance was Scottish First Minister Nicola Sturgeon and Prince Charles, The Duke of Rothesay, current holder of the position ‘Lord of the Isles’. The service was attended by First Minister Nicola Sturgeon and Prince Charles, The Duke of Rothesay.