You are here: Home > Public News > Key insights at AAM
◄Back to News 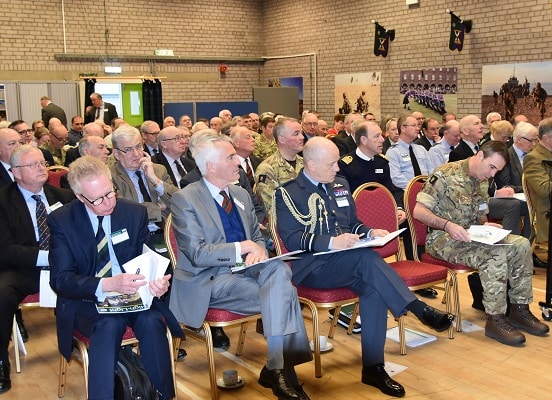 On Saturday the 6 April, over 80 members of HRFCA from across the Highlands and Islands gathered at Queen’s Barracks in Perth for the Annual Association Meeting (AAM).

Guests headed into the 7 SCOTS drill hall to escape the wet and windy weather and caught up with friends over a welcoming tea or coffee.

Chairman, Captain Nick Dorman, started off the Business Meeting by welcoming everyone and thanking those involved with HRFCA for all their hard work over the past year. With office bearers elected or re-elected, The Reverend Canon Dr Joe Morrow was invited to speak about the recently-formed Highland Cadet Forces Trust.

In underlining the Trust’s focus on the value of the Cadet movement, he highlighted the number of young people from disadvantaged backgrounds who have benefited from being involved with the Cadets. Dr Morrow asked those assembled for input and ideas in order to promote the Trust and help them move forward. Following on from this, Chief Executive, Brigadier Mark Dodson, provided his annual review and State of the Nation report. He covered a number of areas ranging from: Cadet Matters, including the creation of the first Volunteer Cadet Corps Detachment outside South England; to engagement, including the launch of HRFCA’s pilot project to work with local Chambers of Commerce; and the Estate, including the progress towards the rebuild of Bruce House Army Reserve Centre in Dunfermline. The morning was brought to a close by external speakers Major General Ranald Munro, Air Marshal Stuart Atha and Major General (Retd) Greg Smith who provided insights and views on the challenges in their respective areas.

A super performance from Military Band of the Black Watch Battalion ACF.

Following music from the ever-entertaining Military Band of the Black Watch Battalion ACF, a hot lunch – prepared and served by Chef Chris Peck and Katie Hulme – was served.

Members were then given a series of updates from senior Service leaders.  These focused in turn on: how 7 SCOTS benefited from the Adventurous Training conducted in Norway as a result of HRFCA welfare grant funding; the current roles and responsibilities of 51 Infantry Brigade and ongoing operational deployments; developments in the Maritime environment, the range of Naval capabilities coming into Service and planned for the future; and the aims and objectives of the recently-appointed Scottish Veterans Commissioner.

These, together with the closing remarks from Rear Admiral Mike Gregory, made for a series of fascinating, insightful and informative briefings.

The Association would like to extend its thanks to all those who contributed to an extremely successful AAM, including in particular: Lieutenant Colonel Matt Sheldrick, CO 7 SCOTS and his team, who continue to not only host the event at Queen’s Barracks every year but support HRFCA throughout the day; SMI Robert Cowan for leading the band; and the guest speakers whose time and expertise was appreciated by all. Members helping themselves to lunch.