You are here: Home > Public News > Laying Up Of Colours
◄Back to News

Laying Up Of Colours 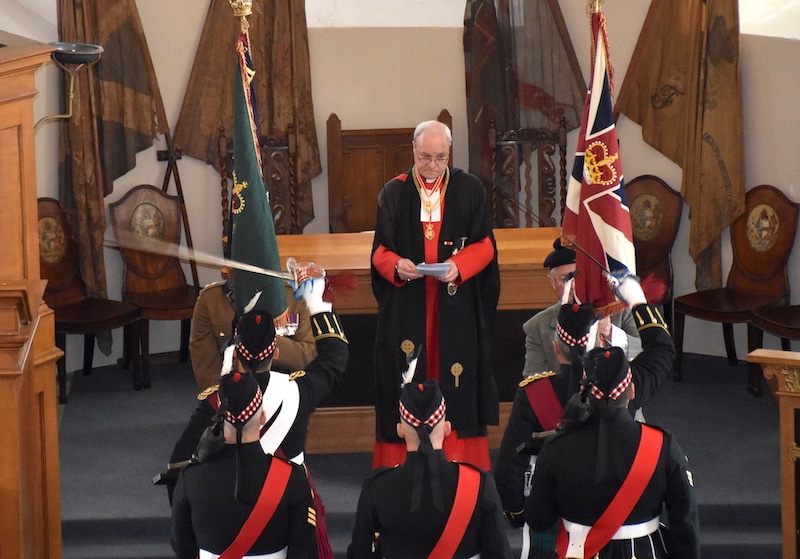 HRFCA had the honour of attending a ceremony for the Laying Up Of The Colours of 2nd Battalion 51st Highland Volunteers.

The event took place at the Regimental Chapel of The Seaforth Highlanders at Fort George on 8 June, with HRFCA Chief Executive Brigadier Mark Dodson and Head of Engagement Michelle McKearnon representing the Association.

The Colours were last paraded in 2011 by 7 SCOTS at Holyrood Park in Edinburgh, when they were presented with new colours by HM Queen.

The ‘Old’ Colours had been kept at the Highlanders Museum at Fort George since but, under Army Regulation, needed to be officially laid up. It was agreed that the most appropriate place for these to be laid up was at the Regimental Chapel. The Queen’s Own Highlanders Regimental Association Pipes and Drums in action.

Prior to the ceremony the Queen’s Own Highlanders Regimental Association Pipes and Drums played outside the chapel. Inside, guests took their seats as the 7 SCOTS Colour Party marched the Old Colours from the Highlanders Museum to the chapel. Padre Torrance said: “I receive these Colours for safe custody within the Regimental Chapel of the Seaforth Highlanders and The Queen’s Own Highlanders here in Fort George.”

A reception followed the ceremony with the day rounded off by the Queen’s Own Highlanders Regimental Association Pipes and Drums playing a Beating Retreat outside the 3 SCOTS Officers’ Mess. The band plays the Beating Retreat. The band marching through Fort George.