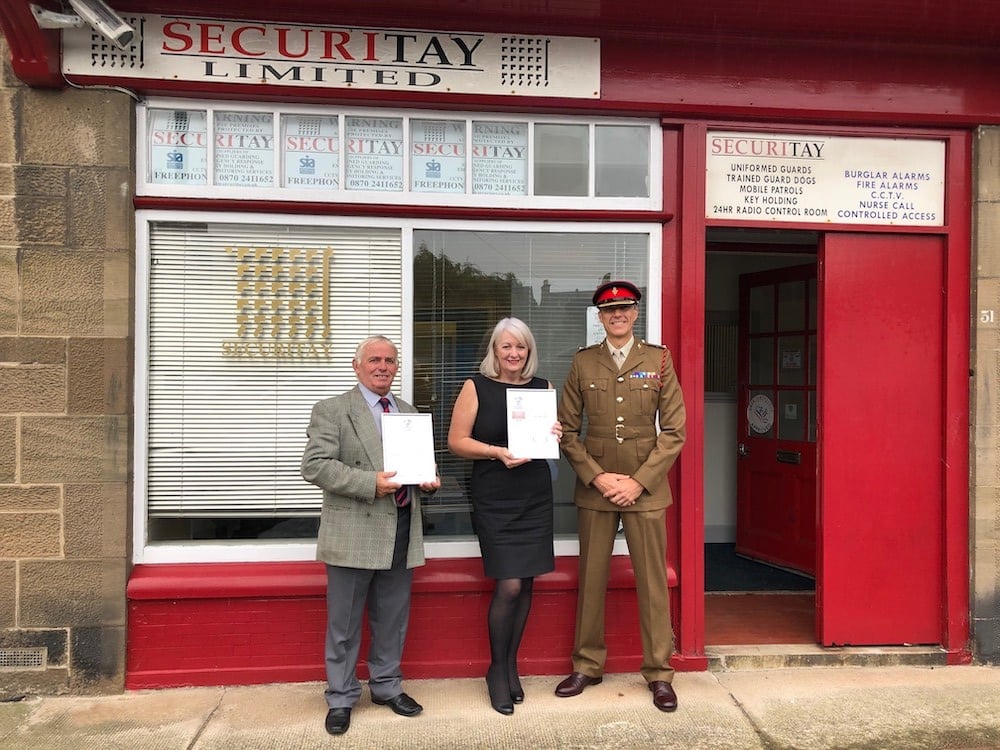 One of Scotland’s largest independent security providers has signed the Armed Forces Covenant.

In doing so Securitay Limited has made a commitment to support the country’s servicemen and women wherever and however it can and to ensure no member of the Armed Forces should suffer any disadvantage as a result of their service.

The 3 September signing – by Securitay Head of HR Dawn McKaig – took place at the company’s head office in Broughty Ferry, Dundee. The document was co-signed on behalf of the Ministry of Defence (MOD) by Lieutenant Colonel Jonny Taffs, the Commanding Officer of Tayforth Universities Officers’ Training Corps.

More than 4,000 UK organisations have now signed the Armed Forces Covenant. Securitay’s commitment to honouring the Covenant includes pledges to:

As well as signing the Covenant, Securitay was also presented with the Defence Employer Recognition Scheme (ERS) Bronze Award. Roy said: “We are grateful to Securitay for demonstrating their support to the Armed Forces community and look forward to working in partnership with them.”

Richard Jennings added: “At Securitay we believe that the Armed Forces are essential to the defence of our country and provide an invaluable service to our local communities. To this end we are proud to support those who currently serve and offer employment to those leaving the services.”

Securitay Limited specialises in delivering a wide range of security provisions including security guards, concierge personnel and CCTV monitoring. The company was founded in 1985 and has offices in Dundee, Aberdeen and Inverness.

For more information on the Armed Forces Covenant and the Defence Employer Recognition Scheme contact Roy McLellan on 01382 631022 or email hi-reed2@rfca.mod.uk.

For more information on the Armed Forces Covenant, click HERE.