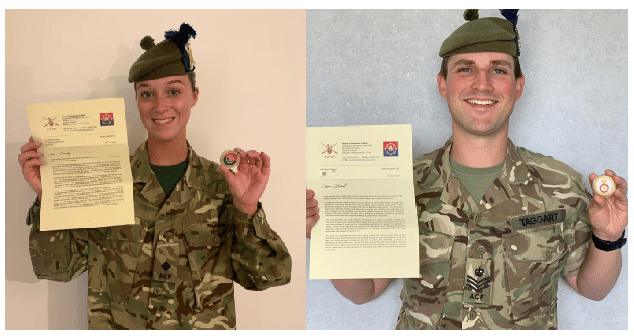 Two adult volunteers from 1st Battalion the Highlanders Army Cadet Force have had their efforts to keep their young people engaged during lockdown rewarded.

2Lt Burnside and SMI Taggart have both become well known faces throughout the ACF during lockdown, co-hosting weekly interviews on the Battalion’s YouTube Channel. The interviews saw Daisy and Stuart speak to various Army Cadet personalities, ranging from the Battalion’s own personnel, former cadets and even senior members of the organisation including author and TV personality Big Phil Campion who is the National Champion of the ACF.

Conducted over a 13-week period the interviews have been shared throughout the organisation with Stuart and Daisy quickly becoming known as the Piers Morgan and Susannah Reid of the cadets, thanks to their blend of serious questioning and humour.

On top of their moral-boosting activities, they have also been ensuring that the cadets of the Battalion – which covers the Highlands, Moray, Western Isles, Orkney and Shetland – have been progressing with their normal cadet training.

2Lt Burnside, who is also Detachment Commander of Culloden Detachment, created an Online Training Programme to allow Virtual Training to take place each week for the Army Cadet’s numerous training levels, which has allowed cadets and the adults from across the Battalion to keep in touch with each other during this time. SMI Taggart, who is the Thurso Detachment Commander, has also been helping deliver Daisy’s online lessons, as well as deliver extra lessons for the cadets of Caithness.

Along with their coins, both Daisy and Stuart received a letter from Brig Christie, with Stuart’s citation reading: “Both the time and effort you have selflessly committed as a CFAV are clearly considerable, during what have been incredibly difficult weeks and now months, I very much admire those who have chosen to make such an outstanding commitment to support the wellbeing of others.”