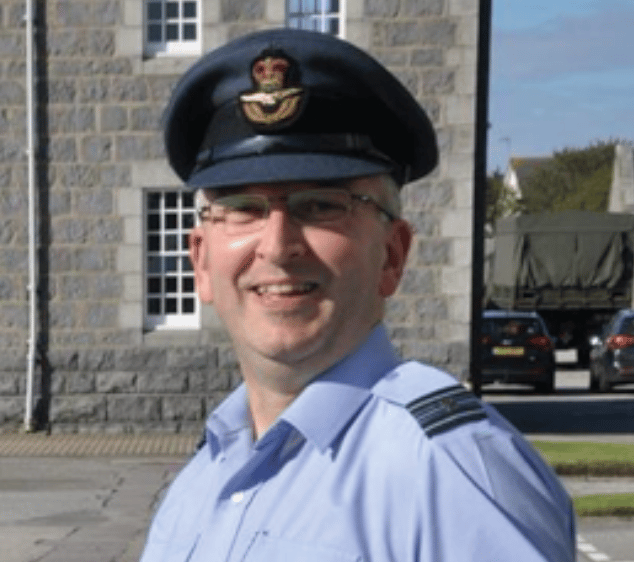 He has taken over from Wing Commander Kelvin Martin who has retired.

Below is Wg Cdr Harrison’s biography. Sean first joined the ATC on 3 July 1979, becoming part of 121 (Nuneaton) Squadron at the age of 13 yrs and 3 days. He went on to attain his Staff Cadet Classification and reached the rank of Cadet Warrant Officer, being promoted to that rank on his 18th birthday. During his time as a cadet he went gliding in the Sedbergh and Kirby Cadet T Mark 3, both of which were open cockpit, winch-launched gliders, before completing his Gliding Proficiency, including a solo circuit, at RAF Little Rissington in a Venture T2 motor glider. Sean also attended a number of camps including an overseas camp in Gibraltar in July 1982.

Following a family move to North Wales in the summer of 1984, the then CWO Harrison transferred to 271 (Colwyn Bay) Sqn but, due to the pressure of starting work as a lorry driver and the time taken to get to the squadron, he had to leave the ATC.

After a further family move to North Shropshire, in autumn 1987 Sean rediscovered the ATC and joined 79 (Whitchurch) Sqn as a 21-year-old Civilian Instructor; he then went into uniform as an Adult Warrant Officer in March 1989 and was commissioned into the Royal Air Force Volunteer Reserve in April 1995. In the summer of 1997, the then Fg Off Harrison transferred to 79 (Market Drayton) D/F, a unit he had helped to run at the beginning of the decade, and was one of the members of staff who oversaw its transformation into 24 (Market Drayton) Sqn.

After a career change, Sean moved to the north east of Scotland and transferred to 1990 (Ellon) Sqn before then being asked to move to 2489 (Bridge of Don) Sqn to help out there. Whilst at 2489, Sean was presented with his Cadet Forces Medal for 12 years uniformed service. In August 2002, Sean was promoted to Flight Lieutenant and moved back to 1990 (Ellon) Sqn, but this time as its Commanding Officer.

In July 2004, Sean successfully applied to become a Wing Staff Officer and moved onto Wing with responsibility for Media Communications and Special Projects. In June 2006, Sean became the Wing Training Officer and in February 2007 was promoted to Squadron Leader. Sean was Wing Training Officer for more than 12 years and in that time oversaw the introduction of the new online assessment process as well as the new cadet classifications. In June 2016, Sean was presented with the Wing Commander’s Sword and in August 2016 he was awarded a Commandant’s Certificate of Meritorious Service.

On 2 Jan 2019, Sean was promoted to Wing Commander and assumed command of North East Scotland Wing. In a cadet career spanning almost 40 years, he has now served at every rank within the organisation from Cadet through to Wing Commander.

Outside of the Air Training Corps, Sean has been an Air Traffic Controller since July 1999 and has been based at NATS Aberdeen since July 2000. He holds Tower and Approach ratings and works as an Approach Radar controller for Sumburgh Airport, as well as looking after the offshore helicopters on two offshore radar sectors. He is also a qualified instructor and examiner.