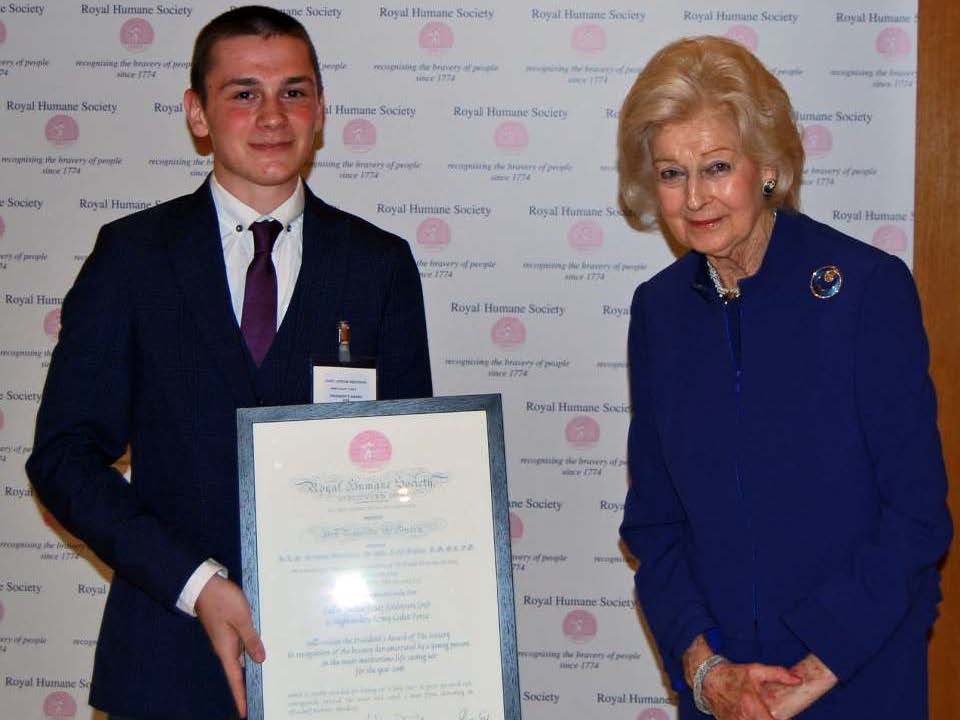 A cadet from 2nd Battalion the Highlanders ACF has been presented with the Royal Humane Society President’s Award.

Cadet Corporal Jordan Anderson (16) received the bravery award from HRH Princess Alexandra (pictured) at a ceremony in Haberdasher’s Hall, London, on 30 May.

Two years ago Cpl Anderson, from Aberdeen, had risked his life to save a man who got into difficulties in Macduff Harbour, Aberdeenshire.

Along with the help of two fellow Army cadets – Katlyn and Shannon Wilson – and their friend Kyle Chapman, Jordan swam around 50 metres to provide assistance while Kyle threw a lifebelt out towards him that Jordan managed to get over the man’s head.

With the assistance of Coastguard staff and paramedics who had arrived on the scene the man was helped from the water.

While all this was happening Katlyn and Shannon comforted the man’s partner, using first aid skills they acquired in the ACF. Sadly, the man died in hospital the following day.

On top of the testimonial, the Society decided that Jordan’s fight to save the man was so courageous that he should be the first to receive the new award of which only one a year will be presented. The award is for the most outstanding act of the previous year by a person under the age of 18.

Andrew Chapman, secretary of the Royal Humane Society, praised the teenagers for their efforts.

He said: “They did a superb job between them in rescuing the man from the water, and caring for his distraught partner. Jordan certainly merits the honour for the way he persevered. The four of them are a credit to the younger generation.”

The Queen is the patron of the Royal Humane Society and Princess Alexandra is the charity’s president.

The society was founded in 1774 and has been granting awards for acts of bravery in the saving of human life for more than 240 years.