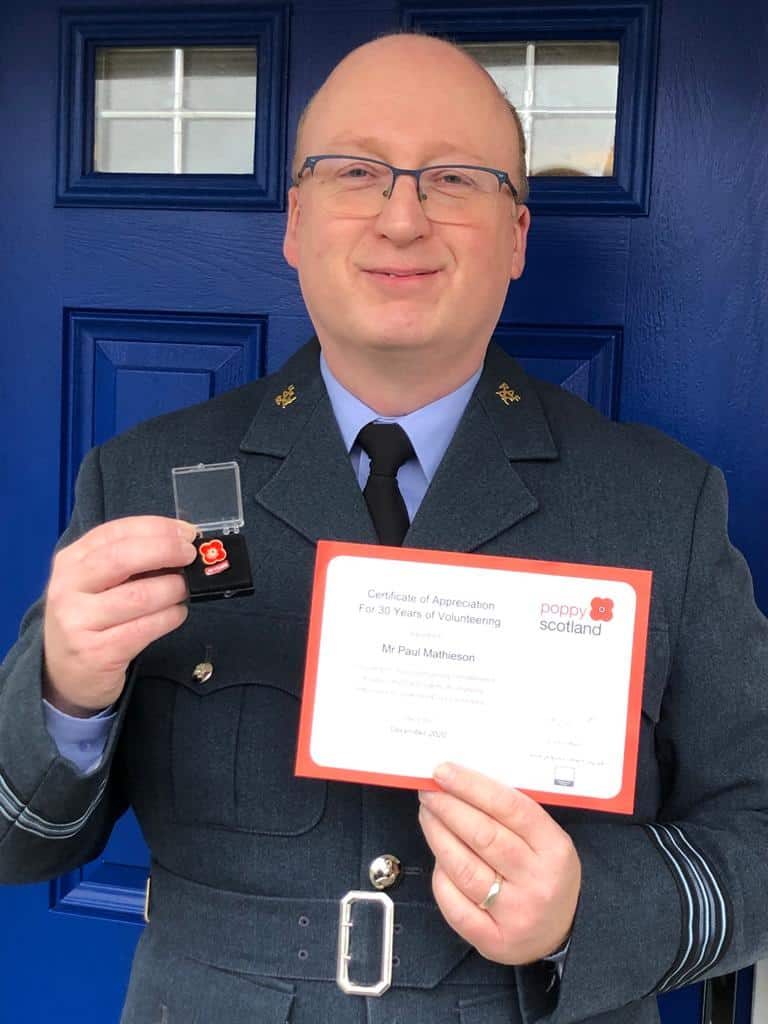 Squadron Leader Paul Mathieson, of Scotland & NI Region RAF Air Cadets (RAFAC), has received a prestigious award from Poppy Scotland for a lifetime of dedicated fundraising for the charity.

Despite a busy day job as a Senior Biomedical Scientist with the Scottish National Blood Transfusion Service, and his volunteer role leading all shooting skills training for the RAFAC in Scotland and Northern Ireland, Paul has a fantastic record of fundraising to support the vital services Poppy Scotland provides across the country. This year marks his 30th and in recognition of this milestone, Poppy Scotland has presented him with their special 30 year commendation certificate.

Commenting on his role and how it began, Paul said: “I joined the City of Dundee Poppy Committee in 1988. In those days all of the cans were counted on Poppy Day and I was gainfully employed using a coin counter borrowed from the local bus depot. This had a broken split pin in the handle and as you can imagin​e, the handle kept falling off! This was brought up every year after by my late friend and colleague Lt (SCC) John Forbes.”

Despite the pressures of work and family, as well as cadet life, Paul remained dedicated to his collecting role.

He said: “As years went on, I was employed in various roles, mainly collecting at football grounds and the like. I was then appointed as cadet co-ordinator; in this position I was in charge of the Tri-Service Poppy Day collections. Four years ago, I was asked to take on the local appointment of Deputy Chair of the committee, a post I took on with no hesitation.”

Motivation is key to such a demanding range of professional, volunteer and family duties and Paul has a very personal reason for his dedication to this special cause.

“Volunteering with Poppy Scotland means a huge amount to me; a medical problem prevented me joining the RAuxAF meaning I have never been able to do an operational tour, so the only way I can repay my debit of gratitude and give the best support to the veterans of Scotland is to continue to support the City of Dundee Poppy Appeal Committee. Our small group of volunteers work hard to ensure that poppies are available throughout the run up to Remembrance Sunday.”

The annual collection duties are now a Mathieson family affair, with Paul now joined by his children to make these collections even more special for him.

He added: “I’m particularly pleased that both of my boys aged 6 and 3 also help to distribute cans and sell poppies with me on Poppy Day.”

The award of this special commendation is fitting for the dedication of Sqn Ldr Mathieson and is justly deserved. On receiving the award (pictured above) he commented: “It was a great honour to be presented with my 30 years of volunteering badge and certificate.”

He said: “Congratulations to Paul on receiving this special national award from Poppy Scotland.  It is fitting recognition for his first class and highly-valued support in this important area over many years.”