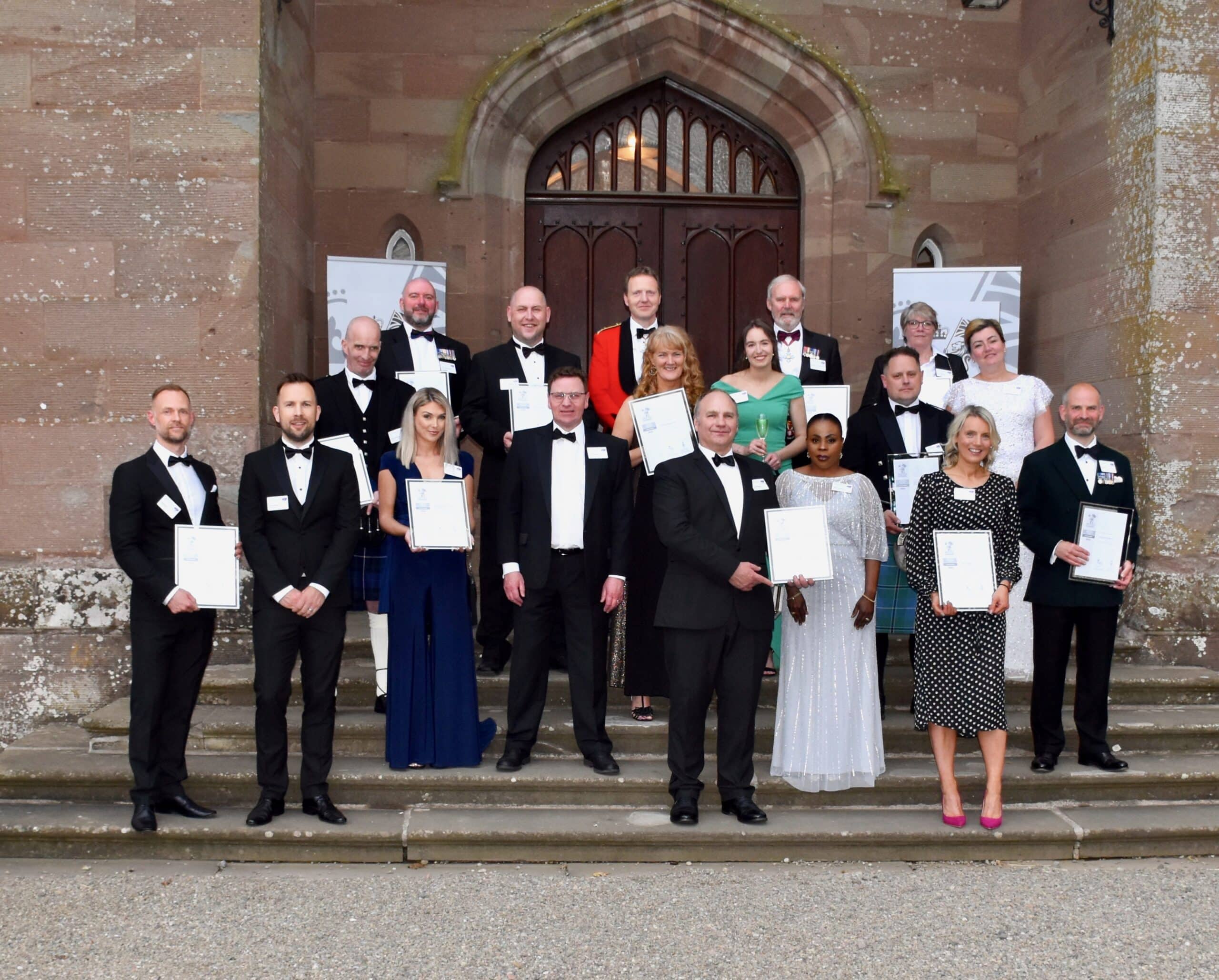 Employers from the Highland RFCA-area gathered amid the splendour of Scone Palace on June 16 to receive prestigious Defence Employer Recognition Scheme Silver Awards.

The event, hosted by Highland RFCA, formally recognised the support the fifteen organisations give to the Armed Forces.

The evening began with employers and their guests piped into the Palace by Private Murray from 7SCOTS before being welcomed by Highland RFCA Chief Executive Brigadier (Retd) Mark Dodson. An opportunity for networking followed before guests were invited outside to enjoy a musical performance from the Royal Marines Scotland Corps of Drums.

Prior to presenting the awards, Major General Wright said: “The success of our Armed Forces in delivering defence capability is entirely dependent on our relationship with the society from which we come. Key to this relationship is the role played by employers, who not only support members of the volunteer reserve forces, but also the wider armed forces family including veterans, spouses and partners; as well as the adult volunteers who are so important to the viability and vitality of our service cadet organisations.

“On behalf of Defence, I thank you for your commitment and for all that you are doing.”

Bon Accord Care, Praesidio Ltd and Recruitment Bee were unable to attend on the evening. Their achievements will be recognised however, with HRFCA’s Regional Employer Engagement Directors visiting each of them in turn to present their awards.

3rd Pixel Ltd Managing Director Shaun Moat said: “Achieving ERS Silver is an amazing milestone for any business and shows that they are committed to the Armed Forces community. Having both my companies (3rd Pixel Ltd and Moray Digital) achieve this prestigious level, I am over the moon.”

IES Callenberg Service Director Adam Riley said: “IES Callenberg is a proud supporter of the UK Armed Forces community and therefore is delighted to have achieved Silver. With an eclectic mix of ex-forces personnel employed in various roles throughout the company, we realise what many of these exceptional individuals have to offer.”

The MacRobert Trust Chief Executive Officer Chris Hockley said: “Supporting the Armed Forces, in all its guises, is a fundamental part of The MacRobert Trust’s DNA. As such, we are absolutely delighted to receive this award and to join, and be recognised, alongside a group of other organisations, that are equally keen to do so.”

Simplicity in Mind Transformational Coach Dave Hill said: “I am delighted that we have received the Silver Award. As a veteran and business owner, I feel it is vitally important to support service leavers, veterans, reservists and their families in the civilian workplace.”

The 2022 Silver Awards winners were:

For 2022 there were also seven companies who had their ERS Silver Awards revalidated. They were:

To find out more about the Employer Recognition Scheme, click HERE.