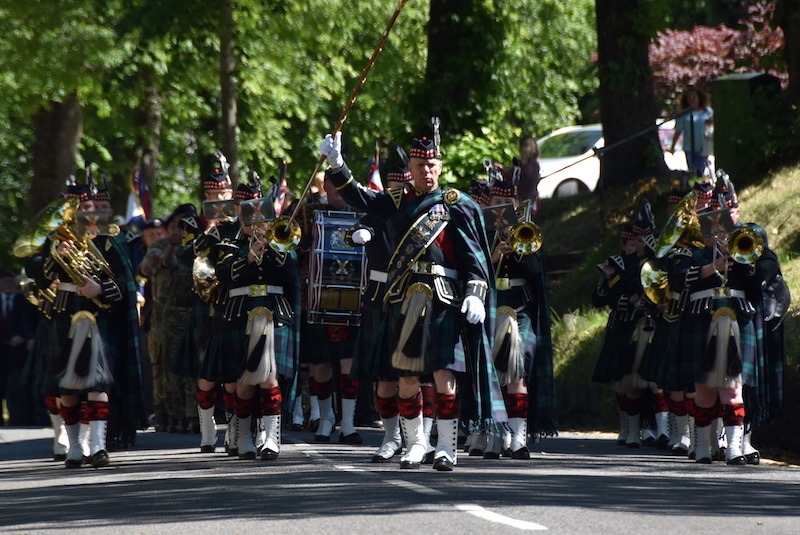 The Cruachan Guest Tent was as popular as ever.

The Cruachan Guest Tent (provided by HRFCA in collaboration with Stirling Council and 7 SCOTS) was again at the heart of the action, welcoming guests for refreshments and a fantastic view of the arena area.

Guest included Mark Lancaster MP, Minister of State for the Armed Forces at Westminster and Graeme Day MSP, Minister for Parliamentary Business and Veterans at Holyrood. King’s Park opened to visitors at 11am where they were able to enjoy a wide variety of stalls and interactive stands from the likes of 7 SCOTS, 71 Engineer Regiment, the Royal Navy, Royal Marines, the Scottish Military Vehicle Group, Service Cadets, Service charities and many others.

The parade, which stepped off from Port Street at 12:05, marched through the town and arrived at the park at 12:30. ACF Cadets form up for the parade.

Prior to the parade inspection by the Lord-Lieutenant of Stirling and Falkirk Alan Simpson and Stirling Provost Christine Simpson, the excellent Red Devils Army Parachute Team treated the crowd to a display. The four-man team dropped into the arena in spectacular style amid a cloud of red smoke.

Musical entertainment followed from the 7 SCOTS Pipe Band and, on the stage, Dionne Hickey.

Next up in the arena was an infantry capability demonstration courtesy of D Company of 7 SCOTS and C Squadron of the Scottish and North Irish Yeomanry.

Action from the infantry capability demonstration.

2015 The Voice champion Stevie McCrorie then took to the stage to keep the crowd entertained ahead of the cadet drill competition.

Taking to the arena were teams from the Sea Cadets, Dollar Academy CCF, ATC from Stirling and Alloa and a team from Stirling Company of the Argyll and Sutherland Highlanders Battalion ACF.

All the teams performed really well in front of the appreciative audience, with the team from the Argyll and Sutherland Highlanders coming out on top. Major Claire Luti receives her certificate from the Lord Lieutenant.

A presentation of a Lord Lieutenant’s Certificate for Meritorious Service was next, with the hard work and commitment of Major Claire Luti of the Argyll and Sutherland Highlanders Battalion ACF recognised.

The day was rounded off with a memorable performance of Beating Retreat from the Band of the Royal Marines Scotland.

All in all, Scotland’s premier Armed Forces Week event didn’t disappoint and has become a very welcome fixture in the country’s summer calendar.

For a full gallery of images from the event, click HERE.