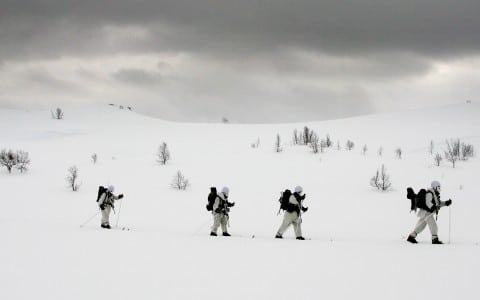 The Royal Marines Reserve (RMR) provides the Royal Navy with a commando-trained General Reserve, volunteers who have all passed the same rigorous tests of their mental and physical abilities as their Regular counterparts to earn the coveted Green Beret. The RMR recruits young men from varied backgrounds and with no previous military experience, as well as former Royal Marines and Regular Soldiers and those who have transferred from the Army Reserve. Currently there are about 600 Royal Marines Reservists who combine their civilian day jobs with serving part-time as fully-trained Commandos, having successfully completed the same commando course as the Regulars.  This enables Reservists to work alongside their regular colleagues, as proven by the fact that roughly 10% of the RMR are currently serving on long-term attachments in regular Royal Marines units.  Royal Marine Reservists continue to develop their core skills in the form of live firing and tactical exercises in the UK and overseas while weekday training may also encompass sports, abseiling and unarmed combat.

The RMR in Highland RFCA’s area comprises Detachments in Aberdeen and Dundee who train on Wednesday evenings and, together with other RMR Scotland Detachments, conduct monthly weekend training.

Joining the RMR requires effort and commitment.  Initial training helps recruits to develop themselves physically, grow in confidence and acquire skills of considerable benefit back in the workplace.  As Commandos, members of the RMR learn increasingly challenging military skills and survival techniques in environments as diverse as the jungle and the arctic.  In addition to gaining specialist qualifications and being trained to handle and fire a variety of weapons, RMR Marines also have the opportunity to take part in a wide variety of sports and Adventurous Training activity.  Rates of pay are exactly the same as for Regular Royal Marines.

To find out more about joining the RMR click here.