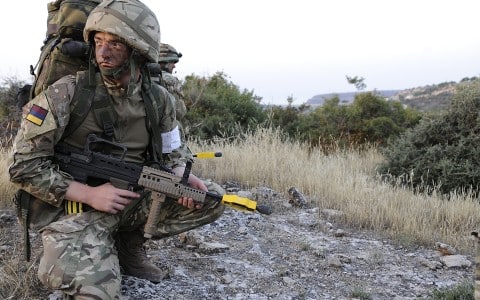 MoD looks to the future with Reserve Troops

In July 2013 the Defence Secretary announced that the previously published 1.8bn investment in a restructured Reservist force will be a major enabler for the UK’s Armed Forces by 2020.

The Future Reserves 2020 (FR20) White Paper announcement revealed a new package for Reservist soldiers, recognising that they are an essential component of national security, our future forces and success on operations.

It provides a much improved prospect for the Reserves of all three of the UK’s Armed Forces.

Soldiers in the Army Reserve, formerly known as the Territorial Army, will be most affected by the White Paper announcement and the TA itself will be rebranded as The Army Reserve; the date for the re-branding has still to be agreed.

It is hoped that across the three Armed Forces Services, the UK’s total Reserves will grow to around 35,000.

Reservists and Regulars will be undergo a major structural change that will see Reserve Units paired with Regular Units, or ‘Parent Units’, for training and operations.

Formal pairing between Reserve and Regular units will increase the capability of the integrated force and optimise the use of training and equipment resources.

The success of this plan will deliver a new integrated “Whole Force” Army of approximately 112,000 in less than a decade.

An equipment budget of £42m will secure delivery of a new training regime, which will include high quality core training for Reservists alongside their Regular counterparts and provide them with access to state of the art equipment Reservists need to perform their roles.

By 2020 it is hoped that Reserves will be a fully integrated component of the Whole Force, routinely deploying as part of all military operation, making a proportionally greater contribution to the Armed Forces than they are today.

As incentives Reservists will be offered rewards and additional opportunity for their service, with improved access to healthcare, welfare support and appropriate recognition for their work. These include:

Click here to view the summary proposition for Reservists

FR20 also recognises the pivotal role played by Employers and families in making Reservists available for service. The provision of more targeted support to both is welcome and necessary and the RFCAs expect to play a significant role in delivering these improvements.

Click here to view the summary proposition for employers

One Army Reservist Employer commented: “In times of need when the Armed Forces need to draw more readily on the Reserve manpower, that man or woman is available to go and serve, and that’s absolutely something we want to support.

“It’s about mutual benefit and a degree of mutual commitment as well.”

Although Reservist numbers are set to increase there will be a reduction in the number of sites and Units from which they work.
The decision to do this was driven by the need to refocus Reserve centres on communities that are best able to provide specialist recruiting opportunities while maximising access to military training.

This reduction will help meet the requirements of the new Armed Forces structures and the Reserves’ roles within it.

Defence has acknowledged that most Reserve sites also house Cadet Units, and within the sites that Reserves vacate they understand the need to ensure that Cadet support requirements continue to be met.

While Highlands RFCA will help advise on regional changes, the three Services will explain the rationale for such change, and will be engaging with key regional figures in the near future.

FR20 has recognised the important roles of the RFCAs in support of Reserves in the future and it is vital that the RFCAs evolve in step with other major changes in Defence.