You are here: Home > Public News > 140 companies honoured for outstanding support towards the Armed Forces
◄Back to News

140 companies honoured for outstanding support towards the Armed Forces 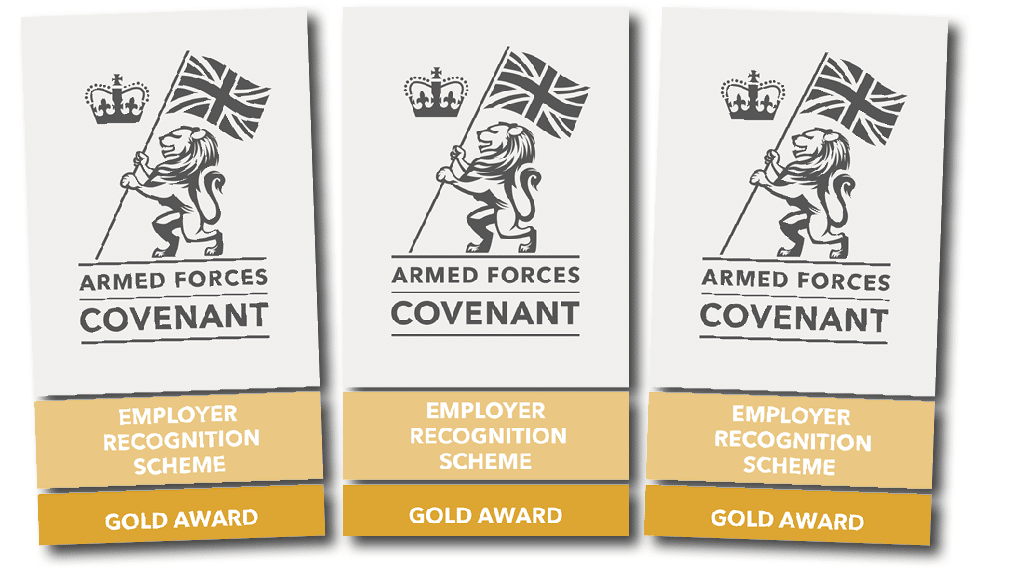 Representing the highest badge of honour, Employer Recognition Scheme (ERS) Gold Awards are awarded to those that employ and support those who serve, veterans and their families.

This year’s awardees brings the total number of Gold holders to 493.

Minister for Defence People and Veterans, Leo Docherty said: “I would like to thank all the organisations who have proven their support for the Defence community during such unprecedented and challenging times.

“The vast range of those recognised this year demonstrates how employing the Armed Forces community makes a truly positive and beneficial impact for all employers, regardless of size, sector or location.”

To win an award, organisations must provide 10 extra paid days leave for Reservists and have supportive HR policies in place for veterans, Reserves, and Cadet Force Adult Volunteers, as well as spouses and partners of those serving in the Armed Forces.

This year, organisations include NHS trusts, educational institutions, financial services, hotels, charities, law firms, police services, football clubs and museums. Nearly 50 per cent are a small or medium-sized enterprise and 72 per cent are private companies, demonstrating the wide range of organisations offering support to the military community regardless of size, sector or location.

Recipients in the Highland-RFCA area (including two Gold holders who had their existing awards revalidated) were:

Fife Chamber of Commerce Chief Executive Alan Mitchell said: “Everyone at Fife Chamber is delighted and humbled to receive this ERS Gold Award. We advocate for our Armed Forces and connect the Highland RFCA team with local employers because it is the right thing to do and because we believe we should acknowledge and be grateful for what our country’s service men and women do for us every day. It feels great to have our efforts recognised and we will display our Gold Award with pride. We will continue to do everything we can to support the Armed Forces and we encourage every business in Fife to do the same. The business benefits are huge: a proud workforce and a better workforce from utilising the world-class training and skills that Armed Forces personnel bring into the commercial world when they finish their military service.”

Highland Council’s Armed Forces and Veterans’ Champion, Councillor Roddy Balfour, said: “It is a great honour for Highland Council to have received the ERS Gold Award for supporting the Armed Forces community in our area especially during these difficult times of the pandemic. The continued support to Armed Forces personnel past and present and their families is vital to the wellbeing of our whole community. This is tremendous news, reflecting on the excellent work that staff in Highland Council have carried out with colleagues in Highland and Moray and in the Military Liaison Group. I would like to thank them all for their excellent achievements working on through lockdown and COVID times.”

Derek Petterson, Chief Executive Officer of McLeod Glaziers, said: “No one said chasing dreams would be easy, but the joy for McLeods in winning this Gold Award has shown it’s right to.”

Councillor Chris Ahern, the Veterans and Armed Forces Champion for Perth & Kinross Council, said: “I am delighted that PKC has been awarded the ERS Gold Award in recognition of its commitment to the Armed Forces Covenant. There has been a tremendous amount of work put in by a small team of officers to get the application in, and through their hard work we have now been successful. The Employer Recognition Scheme shows the commitment of an organisation by signing the Covenant and pledging to support the Armed Forces community and – by achieving Gold – has gone far beyond the basic principles. PKC in its approach to our Armed Forces reservists and cadet force adult volunteers who work for the council shows that it embraces the Covenant principles, and it also show the council’s commitment to working with our Armed Forces and partner organisations who work with and support our Armed Forces, veterans, volunteers and families.”