You are here: Home > Public News > Elgin Detachment on top
◄Back to News 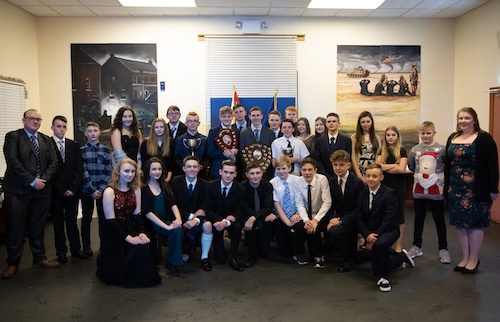 Army cadets from Elgin Detachment have been named the 2018 winners of the annual Moray Company Inter-Detachment Competition.

Twenty-seven cadets from 1st Battalion the Highlanders detachment represented Elgin in the day-long competition against cadets from across Moray Company.

The competition saw almost 80 cadets from the company’s Elgin, Forres, Nairn, Ardersier, Culloden and Pipes & Drums Detachments represent their respective detachments across ten different stands, some held in the warmth of the Battalion Cadet Training Centre in Dingwall and others from the cold of the Fort George Training Area, testing their knowledge of the cadet training syllabus – from first aid to drill & turnout – at their relevant training level.

In each stand cadets competed individually for points for their detachment, which was then tallied up at the end of the competition, with an overall detachment average taken to decide the winner.

The evening saw cadets sit down for their annual Awards Dinner, which was served by their company instructors and saw the opportunity for the cadets to dress up.

Although the trophy everyone was hoping for, the Inter-Detachment Competition Shield, went to Elgin who last won it in 2015, every single detachment won at least one trophy.

The annual Awards Dinner marks the culmination of a year of success for the company, from having Scottish sporting champions and earning medals in several regional and national shooting competitions to retaining the Champion Company trophy at the Battalion’s annual camp in Otterburn.

After the awards dinner, Elgin Detachment Commander Staff Sergeant Instructor Graeme Wells (26) said: “I am absolutely proud of the cadets, they were asked at the start of the weekend to put in maximum effort in the stands and to do their best and they certainly did their best! I, along with the other Elgin adults, are delighted with what they have achieved for 2018 and they should proudly say that they belong to the Champion Detachment within the Champion Company.”