You are here: Home > Public News > Proud moment for Dougal
◄Back to News 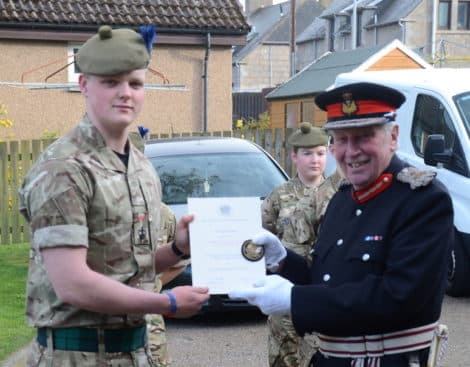 2nd Battalion the Highlanders ACF Cadet Company Sergeant Major Dougal Whyte enjoyed a proud moment when he was appointed as the Lord-Lieutenant’s Cadet for the Lieutenancy of Aberdeenshire.

CSM Whyte received his Appointment Certificate from Mr James Ingleby, Lord-Lieutenant of Aberdeenshire, (pictured, above) at a ceremony held in the Inverurie Cadet Detachment in the presence of his cadet colleagues, family and friends.

Lord-Lieutenant’s Cadets are drawn from the Sea Cadets, Army Cadet Force and Air Training Corps. They are selected in recognition of the outstanding example and devotion to duty they have displayed, as a cadet and member of the community. To be appointed as a Lord-Lieutenant’s Cadet can be the pinnacle of a cadet’s career.

During the next 12 months CSM Whyte will assist the Lord-Lieutenant in his duties.