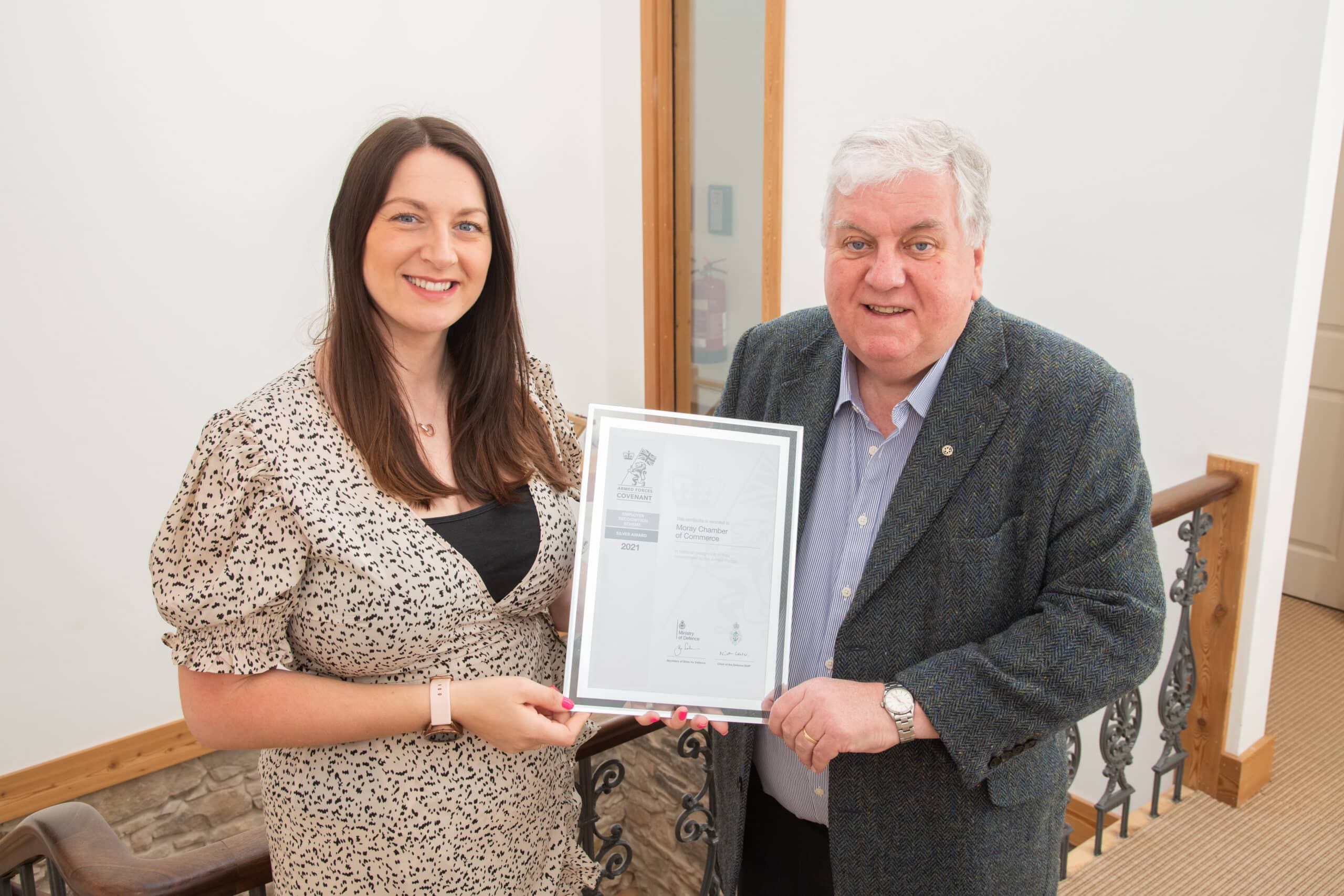 The certificates are for employers who joined the Ministry of Defence scheme in 2015/16, with both Gold and Silver awards reviewed and revalidated on a rolling five-year basis.

Moray Chamber signed the Armed Forces Covenant in 2015, and were first awarded Silver status in 2016. Their Silver Award was renewed in 2021, cementing their pledge and forces-friendly approach. The formal presentation was delayed until 2022 due to COVID-19 restrictions.

The ERS Silver Award is in recognition of the exceptional support employers and organisations, such as Moray Chamber, provide to the Armed Forces community and Defence.

Sarah said: “We are thrilled to be awarded the Silver Award for the second time as we work towards our Gold status. The military is very much an engrained part of our community here in Moray through the personnel, reservists, veterans and spouses and we want equity across the region for them.

“We are proud of our achievement and would encourage any business thinking of pledging their support to do so. We have been involved with the military for many years from leading the campaign to save RAF Lossiemouth in 2011 alongside our community partners to having members of our team take part in an Executive Stretch programme.

“The knowledge and experience shared between military and civilian personnel can be hugely beneficial to all.”

The ERS Scheme recognises those who demonstrate or advocate support to that community and align their values with the Armed Forces Covenant – a pledge from the nation that those who serve or who have served and their families are treated fairly.

Silver Award winners must meet certain criteria, including: employing at least one individual from the Armed Forces community, actively ensuring that their workforce is aware of their positive policies, demonstrating support to mobilisations of reservists and providing at least five days’ additional leave for training.

For organisations to be revalidated they must continue to adhere to that criteria. The revalidations recognise the long-term support employers have given to the Armed Forces community and highlight that, through their consistent support over a sustained period of time, they have been able to continue to champion and demonstrate their forces-friendly measures.

Roy said: “I am delighted to be presenting our Employer Recognition Scheme Silver Award to Moray Chamber of Commerce as a long-time signatory to the Armed Forces Covenant and a participant in this year’s Gold Award.

“More importantly, I welcome the organisation’s stated commitment to supporting serving and former military personnel, reservists, and military families. The Armed Forces are responsible for the first duty of government – the defence of the realm.

“Those affected directly or indirectly by this duty often need additional support and flexibility in relation to civilian employment. The commitment demonstrated by Moray Chamber through the Covenant makes a huge difference.”

For more information on the Armed Forces Covenant, click HERE.

For more information on the Employer Recognition Scheme, click HERE.